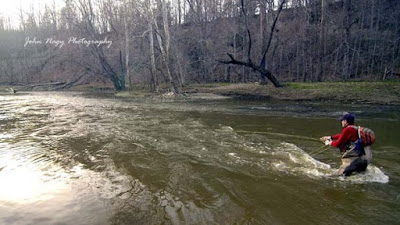 (This is the first of a series of articles by John Nagy on fly fishing "Steelhead Alley" tributary streams and rivers. Future articles will feature Elk Creek, PA and Cattaraugus Creek, NY)

An ancient and rugged river that is largely untouched by man

The Grand River in northeast Ohio can arguably be called the grandest of all the Ohio Lake Erie steelhead tributary streams. More of a brawling river than a stream (especially after run-off episodes), it drains a 712 square mile watershed that is 98 miles in length, through 4 Ohio counties, including 34 miles of fishable steelhead water from the Harpersfield Dam to it’s concourse with Lake Erie at Fairport Harbor, Ohio.

A River from the Past

Prior to the last ice age, the Grand River flowed directly north into Lake Erie but gradually became twisted from the southerly glacial movement of the Wisconsinan glacier some 14,000 years ago and developed a more westerly travel before draining north into Lake Erie.

Designated both wild and scenic river status by the state of Ohio in 1974, the Grand is basically free flowing for most of its length. The upper Grand or lowlands section (above the Harpersfield Dam which prevents most migratory fish movement) has scenic river status and encompasses 33 miles of slow moving water. This upper section is surrounded by a broad flood plain which was formed by an ancient glacial lake. It includes wetlands, swamp forests as well as some agricultural areas.
Due to the slow moving nature of the river here it contains a tremendous amount of silt and mud in its river bottom. In combination with the exposed shale banks of the lower Grand, this has a tremendous impact on the Grand’s clarity (or lack of) after run-off from rainfall or snow melt.
Below the Harpersfield dam the Grand has wild river status for 23 miles to the railroad bridge south of Painesville. This area, know as the Grand River gorge, has a much steeper gradient and runs colder, cutting through ancient shale and siltstone beds forming high cliff banks, steep valleys and at times rather difficult access. Densely forested with northern hardwoods and hemlocks in most areas, it is truly wild in nature with practically no development along its banks. At Painesville the river slows and flows north through an urban environment past long gone Indian fishing village sites on its way to Lake Erie.

The Steelhead of the Grand

Like most Ohio Lake Erie tributaries it is primarily a warm water fishery during the late spring, summer months (with great smallmouth and even muskie fishing opportunities) but quickly cools off in the shorter days of September as night time temperatures drop and fall rains occur.
The combination of lower lakeshore temperatures (68 degrees F seems to stage good numbers of prespawn steelhead along the lakeshore), shorter photo periods and good fall run-off initiate’s steelhead migratory movements up the Grand in early fall. By early May it starts to warm up again causing any remaining postspawn steelhead to drop down to the lower river and eventually into the lake.
The steelhead of the Grand are a mixed bag including a large number of stray fish from Pennsylvania (a “naturalized” Pennsylvania strain which are primarily fall/winter runners) and a significant number of late winter/early spring run steelhead based on the Ohio Department of Wildlife’s direct stocking program of Little Manistee strain steelhead. Also a very small number of stray fish from Michigan and New York as well as some wild fish from the Ontario side of Lake Erie trickle in every season.
According to Kevin Kayle, Aquatic Biology Supervisor for the ODW at the Fairport Fisheries Research Station there is a small percentage of returning steelhead to the Grand based on natural reproduction but no formal data to confirm it. He bases this on past summer sampling of numerous feeder streams to the Grand which revealed decent populations of juvenile steelhead in the 3-5 inch range. These feeders have ideal habitat, water quality and temperatures for both adult spawning and juvenile rearing.
In 1975 the ODW stocked a domesticated rainbow trout known as the London strain (named after Ohio’s London fish hatchery) into many of their steelhead tributaries including the Grand. It was primarily developed for its superior egg survival and growth rates in the hatchery and ability to survive in slightly warmer waters than those inhabited by a typical rainbow trout. This seemed to be a good fit not only for its inland trout streams but also its Lake Erie tributaries which are the southern most of the Great Lakes.
The tributary stockings of the London (a fall runner) resulted in marginal returns from Lake Erie in subsequent years. Growth rates were not impressive either. After a 23 year stocking effort the ODW decided to switch gears in 1989 and try the later running Little Manistee strain steelhead which they obtained from the Michigan Department of Natural Resources in exchange for catfish. They received them in the form of juvenile fingerlings which the ODW later raised to 1 year-old smolts in the 6-8 inch size in their hatchery system. They were initially stocked in Conneaut Creek in the spring of 1989 and eventually the Grand, Chagrin and Rocky Rivers in 1995. 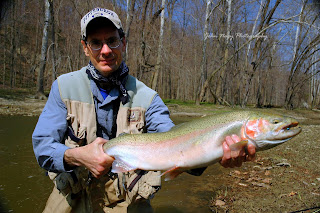 The ODW hit pay dirt and found the Little Manistee strain superior in growth, return rates (3.5 to 1) and length of run versus their hatchery raised London strain fish. They now exclusively stock Little Manistee steelhead into the Grand River as well as the Rocky River, Chagrin River, Conneaut Creek, Vermillion River and Ashtabula River. In 2018 approximately 478,408 Little Manistee smolts were stocked into Ohio's steelhead tributaries with 90,076 planted in the Grand River.
According to Kevin Kayle most Little Manistees return after three summers in the lake (averaging 26-28 inches and 5-8 lbs.) but good numbers of two and four summer fish also occur. Five summer fish are not as common but are most likely 30-31 inches and over 10 pounds.

In September, steelhead will begin to run the lower reaches of the Grand particularly stray, fall running fish from Pennsylvania. A dry fall can keep steelhead low on the river but good numbers of fish can reach the Harpersfield Dam by December if consistent fall run-off occurs. Fall fishing can be good as long as the river does not blow out at which point it usually takes a week or more to clear.
Winter fishing on the Grand can be greatly affected by excess snow melt and rain which can again blow the river out for extended periods of time. Also, total freeze-up of the river flow in January and February is not unheard of. Another scenario is moderate winter periods with very little snow and ice in the watershed. The result can mean fishable water but with morning skim ice and slush flows (that can burn off by mid-morning) the norm.
Early March usually brings ice-out on Lake Erie and a gradual thaw of the Lake Erie tributaries including the Grand. By late March, the peak of the Little Manistee run is approaching with April and early May the best times for this short but much anticipated run. The gorge area of the Grand usually will hold good numbers of steelhead by April.
The best scenario for a good spring run is to have a solid freeze of the Grand in January and February with an early March thaw and a moderately wet, cold spring. The winter freeze prevents early Little Manistee arrivals from the lake, delays any early spawning activity in the Grand itself for any steelhead “wintering over” and allows for an extended spring season due to the cold temperatures and moderate run-off conditions.
The opposite of this is an overly moderate winter (which seems to be the norm in recent years) with no freeze of the lake shore or river, an excessive run-off from rain and snow melt and a mild early spring. The result is a watered down spring run of Little Manistees that have mostly spawned out by April and are leaving the river early due to excessive water temperatures.
April and May can bring a mixed bag of fish to be caught on the Grand including pre-spawn “chromers”, spawners, spawned out fish and hungry “drop-down” steelhead which start to leave the river in late April and early May as water temperatures get into the upper 50’s and 60’s. Smallmouth bass also start running the lower river from Lake Erie in April as an added bonus to fly fisherman.

The Grand River has been kept relatively untouched to development due to its ruggedness and remoteness which can make it a challenge for the steelheader. The good news is that public access is excellent on the Grand and its feeders with several Lake Metroparks located in the gorge area below Harpersfield (see map) that have parking and rest room facilities. By accessing these parks the steelheader can reach, by hiking, many remote areas on the Grand and fish in relative solitude.
Another approach is to float the Grand in canoes or pontoon boats. With canoe access available at the Ashtabula County Park at the Harpersfield Dam and most of the lower Lake Metroparks a number of float trips of various lengths can be planned. In the Painesville area there exists some urban style fishing at the Painesville City Park and the popular “Uniroyal” hole area.
The Grand River is certainly a challenge for the steelhead fly fisherman not only for its ruggedness but for the stubbornness of its usual high and off-colored flows. But with some careful weather and run-off monitoring the patient steelheader can be rewarded with indeed a grand steelhead experience on this ancient river.

More detailed information on fly fishing the tributary streams and rivers of the Lake Erie watershed (including swinging presentations and the Right Angle Floating Indicator Technique) can be found in John Nagy's classic book "Steelhead Guide, Fly Fishing Techniques and Strategies for Lake Erie Steelhead". John Nagy's "Steelheader's Journal" makes a great companion book to the Steelhead Guide. Both are available for purchase in the right menu bar.