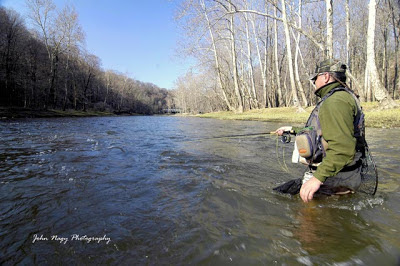 ﻿Dead-drift presentations like bottom-bouncing or floating indicating will always be the mainstay for catching steelhead on most Great Lakes tributary rivers and streams. The reason for this is that the tributaries mostly run cold over the course of a steelhead fishing season (late fall through late winter).

These cold flows (40 degrees F and below) slow down the metabolism of a steelhead making it somewhat lethargic. They typically become finicky, keying in on small egg patterns and bead-head nymphs dead-drifted on or near the stream bottom

A great compliment to this approach is swinging flies for steelhead in the traditional down-and-across manner. Under certain water conditions and river characteristics this technique can be extremely effective with an excitement factor that can shake even the seasoned steelheader!

Traditional swinging techniques were originally developed to catch Atlantic salmon in Northern Europe and the Atlantic Canadian Provinces becoming popular for steelhead in the Pacific Northwest during the 20th century. In recent years, it has developed an enthusiastic following by a growing group of steelheaders in the Great Lakes region.

In the warmer tributary flows of fall and spring (above 40 degrees F) steelhead are more aggressive and will actively move for wooly buggers, streamers, leeches, tube and spey flies on the swing. They actually will “look up” to take a fly swinging fly (above 50 degrees F) and will even chase dry flies “skated” on the surface.

Steelhead caught on swung flies are often referred to as “players” due to their willingness to chase a fly and hit it extremely hard on the swing (some steelheaders have described the take like being mugged on the stream!). This is in marked contrast with dead-drift caught fish, which are generally less aggressive and have a much softer take.

Before beginning your swing technique, first wade into position (usually toward the middle of the river) and look at the water surface texture to locate current breaks at the head of pools, along parallel “seams” that run through pools and runs and also in pool tail-outs. Steelhead use these breaks as resting areas on their upstream migratory movements and you will want to concentrate on swinging your fly through these areas.

Try standing almost directly upstream to the area you want to swing your fly through (the “target zone”) and begin by casting your fly line at a 45 degree angle downstream to the left or right of the target zone. For a single handed cast (with a sinking leader or sink tip line) using a single or double-haul, followed by shooting the line, makes this easy. A traditional spey or double handed casting approach will allow the steelheader to stand much closer to the river bank and effectiveily reach most target zones.

A fly line with a floating/weight-forward taper design (including steelhead and "switch" taper fly line tapers and the very popular "Skagit" head tapers including the new OPST Skagit Commando lines) is the best fly line for this type of cast. The heavy taper of this line casts sinking leaders and sink tips well while the floating component allows for easy mending when swinging the line.

As the fly line makes contact with the water, immediately throw an upstream mend in the fly line. This will help sink both the fly line and the fly more quickly. Follow up by dropping the rod tip and move it across in front of you, stopping at the point where you want the fly to swing to.

The tributary water temperature will determine at what level you need to get the fly to on the swing. In warmer flows (above 50 degrees F), steelhead tend to look up more for a fly, so one or no mends are all that are usually needed. In colder flows (below 50 degrees), steelhead tend to keep tighter to the stream bottom and prefer slower fly speeds. These conditions will require at least 1 or 2 mends to get the fly down.

In really cold flows (less than 40 degrees), multiple follow-up mends are needed to initiate strikes from sluggish steelhead. Making an initial cast greater than 45 degrees is also helpful to get flies down to bottom hugging fish.

Fly Depth on the Swing

Fly depth on the swing is also controlled by the sinking system used in the fly line. By using sink tips of different lengths and sink rates (measured in inches per second or grain weight) for the water flow and depth being fished, you can precisely control the depth of the fly. This is analogous to changing split-shot when dead-drifting.

For smaller tributaries, as well as medium to low tributary flows, custom mini-tips (made out of 2 to 6 feet lengths of sinking shooting head material) and sinking leaders (7 to 12 feet) work well. For big tributaries and high run-off conditions standard sink tip lines (as long as 15 feet) work better. Deep, strong currents on big water may call for 24 foot sink tips or “heads” (which are available in 150-600 grains).

Interlocking loop systems allows these leaders and tips to be easily interchanged on the stream depending on the water flow and depth encountered. Several fly line manufacturers sell fly lines that come with an assortment of interchangeable sink tips (of different sink rates) that cover most water conditions encountered.

Density compensated sinking leaders and sink tips (which have a tapered design) compensate for the thinner diameter front section by adding a denser sinking material to the front portion of the leader or tip. This keeps the leader or tip sinking in a straight line (tip sinks at the same speed as the body) resulting in less line hang-ups on the stream bottom, better strike detection and faster hook-ups.

Along with the sinking system, leader length also plays a key role in fly depth. Leaders in the 4 to 9 foot range will keep the fly higher up in the current flow versus a shorter leader (less than 4 feet) which is ideal for keeping the fly down close to the stream bottom when steelhead are moving less for a fly.

Fly depth can be fine tuned by crimping a small amount of shot to the leader or adding various size brass or tungsten beads to the leader. The beads will slide down to the front of the fly during casting and on the swing.

When trying to get the fly down deep on the swing it is best to rely on your sinking system versus using a heavily weighted fly. Keeping the fly as light as possible will allow the fly to have a lively and natural swimming action on the swing. Flies that are too light (like plastic tube body flies) need some weight added to them (like a light conehead) for proper leader turnover.

To methodically cover a pool or run after the initial swing is made with the fly, lengthen subsequent casts in increments of a foot or so until you have satisfactorily covered a desired section of water. Next, take a few steps downstream and begin the entire sequence again.

The Take on the Swing

Most steelhead take the fly at the end of the swing (more likely chasing the fly across the current and hitting it from the side or rear as it stops) so it is important to anticipate the strike at that point. At the end of the swing, hold the fly directly downstream of you in the current and then follow-up with a strip retrieve. This can induce strikes especially with large streamer, leech and wooly bugger type patterns which provide a lot of movement in the current flow.

The traditional swing presentation allows the steelheader to see the river in a larger view, both downstream and bank-to-bank, as he fishes. It is quite a different experience versus the more localized and focused dead-drift method. You become more in-tuned with the larger flow of the river. The casts and mends of your fly line become intimately intertwined with long runs, riffles and pool tail-out’s as you methodically swing your fly through likely steelhead lies.

This slower, more patient approach often rudely becomes interrupted with the jarring take of an aggressive and hard-hitting steelhead which is hell bent on taking your fly (and fly rod) back to Lake Erie!