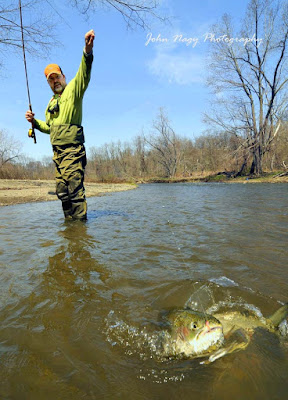 Record rain-fall (and warm temperatures) this past February brought an early spring (and very good steelhead fishing) to the tributaries. March brought back winter steelhead conditions with cold and snowy conditions for most of March. Warmer temperatures and rainy periods (with melting snow pack) are forecast for the end of March. is basically ice free and most southern shore tributaries are flowing well with no ice problems.

News around the Region

The railroad will be reconstructing a 900 foot causeway (road) across the Grand River (just south of Rt. 84) starting on May 1st of 2018. A temporary causeway was put into place last year to aid in the construction of a new $21 million Norfolk railroad trestle (2 year project) but was disassembled to allow free passage of steelhead spawning runs last December 31st. Some steelheader’s believe that the causeway impeded fall steelhead movements up this winter even though it was designed to allow for some fish passage.

Great Lakes Construction has advised that Steelheader’s (and other recreationalist’s) that restrictions will be in place in accessing this area (from Helen Hazen Wyman Park to Route 86/Beaty’s Landing) starting on May 1st once the causeway is in place again and new trestle construction resumes. Signage will be in place on the river detailing specifics on the restrictions which include no parking along Rt. 84, no foot traffic within a 150 foot or more stretch of the immediate construction zone along the river and watercraft traffic closure from Mason’s Landing and Beaty Landing/Rt. 84.

The new trestle will improve the river flow and habitat since it has fewer foundations (versus the old trestle) resulting in less buildup of trees and debris during high water periods.

This past January, the Pennsylvania Fish & Boat Commission (PF&BC) Board of Commissioners agreed to purchase a public fishing easement of 3,960 linear feet along the upper part of Conneaut Creek in , . The easement is located off Fisher and South Creek roads, north of The purchase will add ¾ of a mile of access along the creek.

As of January 2018, the PF&BC has acquired more than 22.5 miles of public fishing access on Pennsylvania Lake Erie tributaries (both with land purchases and easements) under its very successful Lake Erie Access Improvement Program (LEAIP). The program uses money collected from PF&BC Lake Erie fishing permits not only to acquire public fishing access for steelhead fishing but also improve stream habitat and provide public parking areas.

For a detailed interactive on-line map by the PF&BC of fishing access (including LEAIP land purchases and easements) go to: PF&BC Erie Access Map

According to James Markham, an Aquatic Biologist with the New York State Department of Environmental Conservation (NYSDEC), in November 2017, Cattaraugus Creek received a large number of surplus fall steelhead fingerlings (203,000) from New York's Salmon River State Fish Hatchery. This was the second year in a row that the Cattaraugus received surplus fall fingerlings.

According to Markham, the NYSDEC domesticated rainbows have been modified over the years in the hatchery system to spawn much earlier than pure strain rainbows (which are spring spawners) and should contribute to the early fall steelhead runs in New York's Lake Erie tributaries.

More detailed information on fly fishing for Great Lakes Steelhead can be found in John Nagy's classic book "Steelhead Guide, Fly Fishing Techniques and Strategies for Lake Erie Steelhead." His new "Steelheader's Journal" makes a great companion book to the Steelhead Guide. Both books are available by going to the right menu bar for ordering information.