Drop-Backs and Smallies by John Nagy 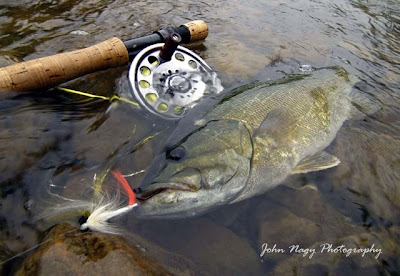 The steelhead will always be the glamour fish on the Lake Erie tributaries but the scrappy smallmouth (most average 2-3 lbs with an occasional one pushing 4 or 5 pounds) provides some good variety for the Lake Erie tributary fly fisherman.>
Smallmouth start showing up into the Lake Erie tributaries in the spring when the tributaries start to warm into the 50’s (late April) with good numbers arriving by May.
>
Running up from Lake Erie in a spawning movement, they are thought to be a river strain of spawning smallmouth as opposed to the smallmouth which exclusively spawns in Lake Erie’s rocky shoreline shallows. During this upstream migration they invariably mix in with “drop-back” steelhead in the tributaries which have already spawned and are moving back to the lake.
>
Drop-back steelhead will be in the tributaries into May and even June (particularly on the bigger “tribs” like Cattaraugus Creek in NY and the Grand River in OH). They will start exiting the tributaries when they get above 70 degrees F. (Note: It is not advisable to fish for steelhead in the tributaries when they are above 70 degrees F since they are highly stressed under these conditions). Tributary smallmouth finish spawning by early June and exit the tributaries by mid-June.>
Smallmouth typically don’t run as far on the tributaries as steelhead, so look for them in the mid-to-lower part of the tributaries. They also prefer to hold in slower water than steelhead (especially when they first come in and the tribs are relatively cold), such as slower runs, slow/deep pools, pool tail-outs and also pool back-eddies.>
Streamer patterns that imitate Lake Erie baitfish such as round gobies, emerald shiners and rainbow smelt are killer for these fish. Crayfish, sculpin and large nymph patterns are also very effective. Top water bass flies will work when the water starts to warm up.>An exciting way to catch tributary “smallies” is with a down-and-across swing presentation using a sink tip fly line. A slow and deep presentation through streambed shale ledges and cuts and near boulders and fallen logs will produce smallmouth. It is not uncommon to think you have hooked a drop-back steelhead on a swing but turns out to be a hard hitting and fierce fighting smallmouth.


Some of the bigger tributary running smallies actually are better fighters than most spring drop back steelhead which (although having voracious appetites) seem de-energized from wintering over, spawning-out and enduring the gaunlet of fisherman. (The exception would be late winter/early spring arriving Little Manistee strain steelhead which have all the fighting ability and more of fall running steelies). 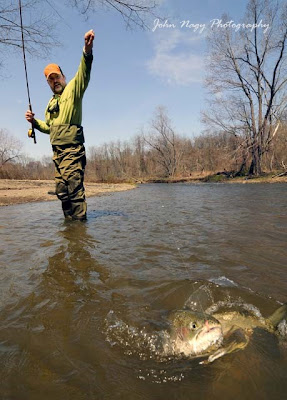 
Smallmouth and steelhead are not the only fish to be found in the tributaries in the spring. Some of the larger tributaries also have spawning populations of walleye and catfish (running in from Lake Erie) which also can be caught with fly tackle and flies.>
Lake Erie tributary smallmouth fishing in the spring has a lot of pluses. A variety of fish are available to be caught, pleasant weather conditions are the norm and most of the crowds chasing “chrome” are gone, leaving solitude a refreshing companion for the fly fisherman.
More detailed information on Great Lakes tributary fly fishing can be found in John Nagy’s book “Steelhead Guide, Fly Fishing Techniques and Strategies for Lake Erie Steelhead”.