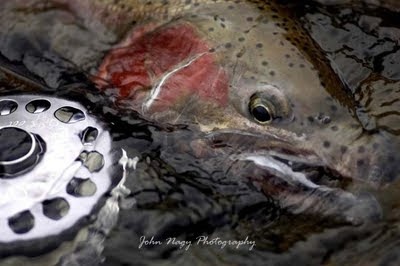 -Please police our ranks if you see a problem individual either call the PA F&BC at (814) 337-0444 or in a non confronting manor inform the individual of the situation and the status quo.
<
-Above all remember fisherman are uninvited guests and should be discreet about their actions on all landowners property. All it takes is a few to ruin it for all of us, or the next time we fish we may see a No Trespassing signs.
- Hot spots are:
20 Mile Middle Road area, and Pond area, due to parking.
Elk upstream of American Legion.
>
New York
>
A major flooding event occurred on Cattaraugus Creek and other Western NY Lake Erie tributaries on August 10, 2009. The USGS gage for Cattaraugus Creek on that date recorded 30,000 CFS and 13 feet gage height which resulted from a late summer thunderstorm that dropped 9 inches of rain in less than 24 hours. To put these numbers into persepective, the “Cat” is usually fishable (depending on clarity) below 500 CFS. Gowanda, NY (which is located on Cattaraugus Creek) received major flooding, with 2 people losing their lives and the municipal water supply system severely damaged. Numerous local roads were also severely damaged. For flooding video visit: http://www.youtube.com/watch?v=IKOi6fh-K7U
>
From the fishing perspective the “Cat” has obviously been significantly impacted by this event. How much of an impact is too early to tell since (as of August 29, 2009) the river is still running somewhat high and muddy and will be difficult to access damage until things clear up. Since a tremendous amount of silt and sediment has been flushed into the Cattaraugus Creek valley it may take a good while before the Cat clears (which may impact the fishing this fall). Also, any rain events (whatever the magnitude) will more than likely continue stirring up this excessive silt and sediment. Will be interesting to see how the river fishes this fall. Please keep your thoughts and prayers with the people of Western NY who experienced this terrible flooding.
>
John Nagy has an article on Cattaragugus Creek, NY in Fly Fisherman Magazine (December 2009 issue/available September 2009). The article details techniques and strategies for fly fishing the Cat (also including John Nagy's Lake Erie Rainbow Smelt tube fly pattern) as well as information on the proposed fish passage device installation on the Springville Dam on the upper Cat by the Army Corp. of Engineers.
>
This project (also know as the Cattaraugus Creek Restoration Project) would further develop the wild steelhead fishery on the Cat (there is ideal habitat for natural reproduction above the dam) and also open up 34 miles of existing New York State Public Fishing Rights land easements above the dam to steelhead fishing. This would go a long way in relieving the heavy fishing pressure on the lower river.
>
Update on Cattaraugus Creek Restoration Project (proposed fish passage device installation):
>
The Army Corp. of Engineers is continuing a feasibility study this fall (2009) investigating the structural integrity of the Springville Dam and powerhouse. The results of this analysis could influence the development alternatives for the fish passage device (although dam removal is still an option). The Corp. will also be doing an ice study this winter on Cattaraugus Creek to see if the Springville Dam acts as an ice barrier and how this effects the river below the dam.
>
A public information meeting concerning this project is expected to be held by the Corp. in the spring of 2010. The Corp. encourages the public (both fisherman and private landowners) to attend this meeting not only for the latest information on the feasibility study but also for public concerns/recommendations on the Cattaraugus Creek Restoration Project in general.