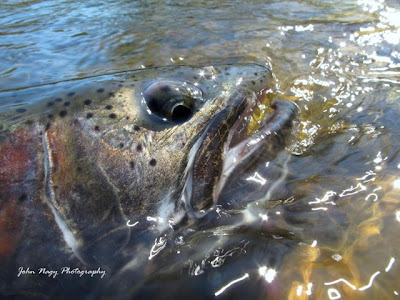 Lake Erie steelhead like this trophy male or "buck" are being threatened by the rise of invasive sea lamprey populations in the Lake Erie basin
<There is certainly a chill in the air this September! With the autumnal equinox here (the beginning of fall), the days are become shorter, the Lake Erie shoreline is starting to cool down and steelhead are beginning to stage for their fall migratory movements into the tributaries.<An early September cold snap has moved small numbers of steelhead into the lower reaches of some Lake Erie tributaries. Periods of tributary run-off and colder temperatures in later September have caused more steelhead to trickle in. Expect this trend to continue into October with the peak of the fall run in November. The remnants of a fall hurricane (several days of a soaking rain) is always a bonus for good run-off and runs of fresh steelhead in the fall.<On November 9, 2011 the Lake Erie water temperature (degrees F) off Toledo was 49, off Cleveland was 52, off Erie was 50 and off Buffalo was 52.<


News Around the Lake Erie Region

Look for John Nagy’s new book the “Steelheader’s Journal” coming out in February 2012.