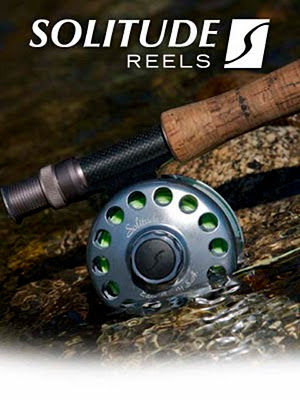 The newly improved Solitude Fly Reel by Edco
<
Edco has recently made some improvements to its Solitude fly reel that it feels will enhance the quality of the reel considerably
> The moderately priced but precision made fly reel has a large following and has been called the “guides” reel for its dependability and performance >
Edco has changed the cork material (that was previously used in both the original “Harris” Solitude and the redesigned Edco Solitude fly reel) to a much stronger, longer lasting cork material that is specifically designed as a friction material.
>
The capacity for this cork to withstand heat build up far exceeds the limits of the former cork used. This new cork does not compress under stress which allows for the drag to remain constant even during heavy compression and subsequent release of drag pressure. The net effect of this cork is a drag system that will far out last the previous system and perform more consistently during its life.
> Edco has also changed the stainless material used in the reel from 416 stainless to 17-4 stainless (which is a highly corrosive resistant material). Based on both field and in-house testing (using a specialized saltwater chamber) the reel has performed admirably in both salt and freshwater. > Ordering Solitude Fly Reel
<
Edco’s Solitude reel comes in 4 sizes (from trout to salwater) and 3 finishes (including pewter, gold and black). It is available in both a standard and large arbor spool design. (The large arbor Solitude V is what John Nagy uses on his Noodle Fly Rod).
>
If interested in ordering a Solitude fly reel (or John Nagy Noodle Fly Rod) please contact John Nagy at steelheadguide@hotmail.com or (412) 531-5819.
<
For retail pricing and technical specifications on this reel please visit Solitude Reels at: solitudereels.com
also go to:
The new Solitude Fly Reel...the Guides Reel

"Perhaps fishing, is for me, only an excuse to be near rivers." Roderick Haig-Brown, A River Never Sleeps, 1946

My primary goal for the Steelhead Journal is to educate steelheader's in all aspects of Great Lakes steelhead fly fishing with a special emphasis on the Lake Erie steelhead fishery known as "Steelhead Alley" (a region which encompasses the Ohio, Pennsylvania and New York steelhead tributaries of Lake Erie).

All the photos and articles on this website credited to John Nagy are the exclusive property of John Nagy and Great Lakes Publishing.

Anyone interested in any of this material please email John Nagy at: steelheadguide@hotmail.com