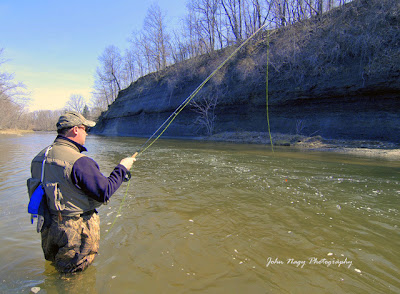 The “right-angle-floating-indicator-technique” or RAFIT is an indicating method that uses a super buoyant floating indicator like a Lil’ Corkie to form a right angle in the leader (at the indicator/leader contact point). The floating indicator allows you to “suspend” the fly, at or just above the stream bottom. Very slow, long and drag-free drifts (along the stream bottom) can be achieved with the RAFIT method


There are a number of reasons for the popularity of indicating for Great Lakes steelhead. These include the small size and confining nature of most Great Lakes tributaries which makes steelhead “finicky” after entering them. They often key in on small egg patterns and nymphs, dead-drifted precisely along the stream bottom (which indicating is ideal for doing).m

Also, the Great Lakes tributaries generally run cold during the course of a steelhead season (on average 45 degrees F and below) making steelhead somewhat lethargic. Most of the time they will not move much for a fly (particularly during the late fall through early spring) and prefer to hold in slow current areas close to the stream bottom or along a current break like a shale ledge. Dead-drifting flies through these “restricted strike-zones” is deadly for catching drag-conscious steelhead.n

Finally, the small size of most Great Lakes tributaries makes “short-drift” type presentations (like the RAFIT method) the best approach for drifting through tight areas (with extended drifts) like small pools and runs, stream bed depressions, along rock ledges, behind boulders and adjacent to bridge abutments. This presentation also works well in most water depths and current speeds.m

The following is a top 10 list of the Do’s and Don’ts of Indicating for Steelhead:n

1) Do use a “tandem” fly setup when indicating. Try an egg fly (top fly) with a bead-head nymph as the bottom fly. The egg pattern acts as an attractor (particularly especially in stained water) with the nymph as a “teaser”.m

2) Don’t let your floating indicator “get ahead” of your fly when indicating with the RAFIT method. An initial upstream line mend and periodic “checking” of the buoyant float will keep the float (which is drifting in the faster water surface) in-line with the fly (which is drifting along in the slower stream bottom current). This will prevent fly from being pulled off the bottom and drifting faster than the bottom current.

Also, wind can have an effect on the drift of your floating indicator. Wind blowing downstream (in the direction of the floating indicator's drift) can speed up the float, necessitating more checking. Upstream wind directions will slow the float down and mean little or no checking at all.

3) Do use a long section of knotless tippet material when indicating (although the end may require a short section of lighter/smaller diameter tippet for finicky fish in clear flows). This knotless section permits for easy floating indicator adjustment on the leader without removing the indicator. Softer/flexible varieties of tippet material are more conducive for forming the right angle in the leader in the RAFIT method.

Also use a tippet ring or tiny swivel at the tippet/leader connection in the RAFIT method. This will extend the life of the leader since most break-off's (besides at the hook connection) will occur at this point (necessitating only the replacement of a long section of knotless tippet material). This rigging also allows for abrupt leader to tippet transitions (e.g. going from 2x to 4x or 3x to 5x) with a simple clinch knot at the tippet ring or swivel.

4) Don’t use too short of a leader when using the RAFIT method. The right angle formed in the leader requires the leader to cover more distance (versus bottom-bouncing without a floating indicator).m

5) Do keep split-shot close to the fly when indicating. This placement will get fly down quickly in tight/fast areas (although clear flows though may require you to “back” shot of some to keep from spooking fish).m

6) Don’t make adjustments to the indicator to fly distance irregardless of the water type fished. In the RAFIT method, indicator adjustments are necessary to compensate for varying water flow depths and ultimately to get the fly down to the steelhead and drifting in front of their face. Winter steelheading often requires very small indicator adjustments. Under these conditions, one or two inches can make all the difference in the world for  hooking-up with bone chilled/lethargic steelehead who seem to have a case of “lock-jaw”.

8) Don’t pay attention to what the floating indicator is doing on the water surface. Abrupt stops and hang-ups usually mean the float to fly distance is too long (fly/split-shot is hanging up on bottom) and needs adjusted. Small hesitations in the drift of the indicator like a slight bump, stop, dip or slow sinking of the indicator usually means a strike.

10) Don’t recognize when it is time to not use a floating indicator. Extremely shallow, fast runs are best fished bottom-bouncing without a floating indicator (but a small semi-buoyant “strike indicator” may be necessary for strike detection). Also, wide/long gravel runs and pools are more efficiently fished and covered by swinging flies. Indicating large rivers and big sections of water (that do not have any specific structure like a boulder or shale ledge to attract holding steelhead) can often feel like trying to find a needle (or in this case), a steelhead in a hay stack!