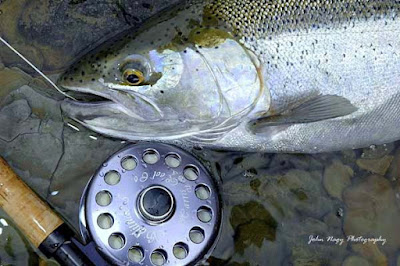 Summer is over and fall chrome is moving into the Lake Erie tributaries
On October 8, 2016 the Lake Erie water temperature (degrees F) off Toledo was 65, off Cleveland was 69, off Erie was 67, and off Buffalo was 67.


News Around the Great Lakes and Lake Erie Region

A study released in January of 2016 (and headed by the University of Michigan) concluded that if bighead and silver carp took a foothold in Lake Erie (migrating from the Mississippi river), they literally could take over the lake ecosystem and make up 34 percent of the total fish weight in the Lake. This imbalance would greatly affect sport fish populations like walleye and steelhead.

To help curtail this migration, an earthen berm was completed (May of 2016) at the Eagle Marsh Nature preserve in Fort Wayne, IN by the U.S. Army Corps. of Engineers (USACE) and the U.S. Department of Agriculture’s Natural Resources Conservation Service (NRCS). The berm will prevent Asian carp from moving between the Wabash River in IN and the Lake Erie watershed in OH (through the Maumee River).

A major water route that Asian carp could use to get into the Great Lakes is the Chicago Area Waterway System (CAWS). The USACE has built an electrical dispersal barrier at Romeoville, IL to prevent carp movement through the CAWS and into Lake Michigan which lawmakers, conservation groups and sport fish organizations say is insufficient.

The USACE says it needs another four years to study all options to prevent carp movement through the CAWS. Many believe that the best solution would be to create a hydrological separation between the two drainage basins by closing the Chicago Sanitary & Ship Canal. The USACE estimates a basin separation (which was one of their proposals in a 2014 congressional report) could now entail costs of $18 billion or more.

Sea lampreys can have a negative effect on steelhead, brown trout and other Lake Erie fish species such as lake trout, walleye, whitefish, chub and herring. A parasitic phase sea lamprey can destroy up to 40 lbs of fish during its lifetime. Six out of seven fish attacked by sea lampreys die.

-Study of the production potential for sea lampreys upstream from critical barriers by sampling habitat and native lamprey populations as a surrogate for Lake Erie sea lampreys.

The report says the federally funded feasibility phase of the project has been completed with the project partnership agreement being negotiated and signed by all parties during the summer of 2016.

The importance of this barrier on the deteriorating Harpersfield Dam is to prevent lamprey passage and reproduction upstream of the dam. This will eliminate the need for costly lampricide treatments ($335,000 per treatment), help lower the overall sea lamprey population in Lake Erie and eliminate lampricide application which can be lethal to some non-target species in the Grand River watershed.

The new public fishing access areas on Elk Creek include:

-Two easements (1,175 and 870 linear ft.), located off of Elk Valley Road and downstream of Fairview Township’s Struchen Flats property. The addition of these easements creates a 1 mile corridor of connected public access.

-One easement (410 linear ft.), located off of Rick Road and upstream of the PF&BC’s Rick Rd. access.

-Approximately 1,600 linear ft. of frontage on 8 acres of land (property acquisition) immediately west of Interstate 79 and at the end of Skinner Rd. near McKean, PA.

The PF&BC believes an increase in male “jacks” (immature returning steelhead) in spawning runs since 2010 and increased juvenile stocking size (which influences jack numbers) has impacted  this decrease in mean length.

To supplement the 120,000 Salmon River hatchery steelhead (59,145 of these were stocked in Chautauqua Creek to maintain an ongoing research project on stocked steelhead emigration) surplus steelhead were obtained from the states of Vermont and Pennsylvania. These included 28,400 yearlings and 32,000 spring fingerlings (Magog and Washington Strain) from Vermont (and stocked in Eighteen Mile Creek) and 30,000 Lake Erie Strain fall fingerlings from Pennsylvania (and stocked in Cattaraugus Creek).

The NYDEC changed their steelhead stocking policy on the Lake Erie tributaries in 2015. Steelhead are now stocked closer to the stream mouths (versus upstream in the watershed).

This change was made due to the reduced number of fish available for stocking in 2015 and emerging results of the NYDEC Chautauqua Creek steelhead emigration study which showed that many upstream stocked steelhead were not smolting (due to their small size) and not emigrating out of the stream to Lake Erie.

The NYDEC Chautauqua Creek steelhead smolt emigration study will continue for a few more years and gather data to determine the best combination of stocking location and juvenile size for smolt survival and out-migration to the lake (with the goal of improving adult returns). Steelhead stocked into Chautauqua Creek in 2015 were marked with combination fin-clips and coded wire tags for this study.

The NYDEC has released a draft of a 10 year Steelhead Lake Erie Management Plan. The plan had a public comment period up to August 1, 2016.

Some of the major goals and strategies of the plan include:

-Maintain average steelhead catch rates of 0.33 fish/hour or 1 fish per 3 hours of fishing (A 2014-15 NYDEC angler survey found NY tributary catch rates of .32 fish/ hour which is much higher than many Great Lakes and West Coast tributary steelhead fisheries).

-Encourage production of wild steelhead in areas with suitable water quality and habitat (68% of NYDEC surveyed anglers relayed that catching wild steelhead was important to their fishing trip).

For the complete draft management plan go to:
http://www.dec.ny.gov/docs/fish_marine_pdf/dlertmanageplan.pdf

A draft of the Project Partnership Agreement for the Springville Dam Ecosystem Restoration Project on Cattaraugus Creek, NY is being reviewed by the non-federal sponsors of the project.

Upon completion of the review, the USACE will finalize the draft for signature by all parties. Erie County, NY in 2016 has committed $470,000 toward the non-federal cost share of the project.

Some of the fishery information and data for this 2016 Fall Steelhead Report was referenced from The 2016 Great Lakes Fishery Commission/ Lake Erie Coldwater Task Group Report and the 2016 NYDEC Lake Erie Annual Report. Special thanks also goes to Kevin Kayle, Chuck Murray and Jim Markham, Lake Erie fishery biologist’s (of OH, PA and NY respectively), who helped with this (and past) John Nagy Steelheader's Journal steelhead reports.

More detailed information on fly fishing for Great Lakes Steelhead can be found in John Nagy’s classic book “Steelhead Guide, Fly Fishing Techniques and Strategies for Lake Erie Steelhead.” His new “Steelheader’s Journal” makes a great companion book to the Steelhead Guide. Both books are available by going to the right menu bar for ordering information.