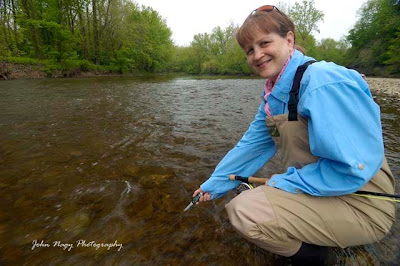 Claudia Buzsics taking an early fall Lake Erie tributary water temperature
<
Both successful and consistent steelhead fishing can be achieved by the Lake Erie steelheader if he or she simply gets in the habit of taking water temperatures when out on the tributaries
This is easily done these days with the advent of the standard type digital thermometer and the newer infrared models. The infrared designs (William Joseph, LL Bean and Orvis offer them) simply require pointing the unit at the water surface to get a digital temperature reading in milliseconds
>
The USGS (http://waterdata.usgs.gov/nwis/rt) also provides internet real-time water temperature readings in degrees C (in addition to discharge flow and stage height data) for a limited number of Lake Erie tributary streams, including the Rocky River in Ohio and Walnut Creek in Pennsylvania.

Observing fluctuating water temperatures is not only vital for locating the bulk of steelhead in a tributary through the fall, winter and spring seasons, but also for monitoring steelhead holding locations (as well as movements) on a daily basis. It can also influence the technique and flies the steelheader chooses to use for that particular day on the water.