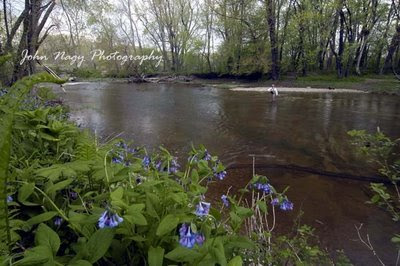 Blue bells and spring steelhead fishing on an Ohio steelhead tributary
Fly fishing the Lake Erie tributary streams in the spring is in a lot of ways a paradox of the winter steelhead season. To begin with, stream temperatures are pushed from the frigid low 30’s into the 40 degree F plus range. This causes sluggish steelhead already in the streams to become more active and aggressive

Steelhead begin moving from their winter locations (deep, slow moving pools and eddies) to shallow, gravel spawning areas fulfilling their strong reproductive urges. This usually occurs in late February and continues through April. Scientists have determined that this spawning behavior is triggered by a combination of two factors: stream temperatures (40 degrees F or above) and increasing "photo periods" or periods of light versus dark.

Locating spawning areas or "spawning beds" can result in some fantastic (and controversial) steelhead fly fishing during this time of the year. This is not only true for spawning steelhead on their beds but also pre-spawn and "spawned-out" fish located nearby and "drop-back" steelies heading back to the lake.

Ideal spawning beds are basically riffles, which have large-size diameter gravel, are 1-4 feet deep, and have darker color bottoms. Next to these areas are usually deeper runs, pockets, or pools which harbor pre-spawn and post spawn fish, as well as fish that have been spooked off their beds.

Actual spawning involves a female steelhead moving into a spawning area and digging out a "redd". She will do this by turning on her side and making powerful upsweeps of her tail in the gravel. The current washes away loose gravel until a saucer shaped hole has formed which will hold her eggs. Males will be attracted by this activity and begin competing for spawning rights, with the largest and most heavily kyped males winning out. They will use their superior power and large kypes (which are grown for this purpose) to drive inferior males from the redd.

After the female drops her eggs, about 20 % of what she is carrying, the dominant male will fertilize them (sometimes one, or possible two, sub-dominant male will also participate), and the female moves immediately upstream to begin making another redd. The displaced gravel from this redd covers the previously fertilized eggs downstream. The female will continue this process until she is spawned out.

When you are fly fishing a spawning bed there are several things to keep in mind. If you don’t notice any spawning activity on the bed itself, blind fish adjacent deep-holding areas. As previously stated, these areas can hold steelies that are not in a spawning mode.

Fishing on the beds themselves has a simple strategy; fish for the males. They will be easy to distinguish from the females since they appear almost black while the females are bright silver. If you catch the female first, the males will quickly scatter. These aggressive males become very territorial and are not actually feeding, but will chase flies to dominate a redd.

Before fishing, position yourself slightly upstream of a redd and cast your fly so it reaches stream bottom as it drifts through. Mend your line to maintain a dead-drift and keep a tight line so you are able to quickly set the hook. Try to visually follow your fly through the redd so that you target the males and react quickly to their takes.

More often than not you won’t be able to see spawning fish very well on the bed. This is usually the result of spring run-off, which causes high, turbid water, or a spawning bed with a dark bottom. The dead giveaway though is the female as she turns on her side; the tail shakes giving flashes of silver, or gold in muddy water. Wearing polarized sunglasses on bright days is a tremendous help in seeing these flashes. Mentally mark this spot in the stream and fish to areas just downstream where the males will be holding.

Another effective strategy (again positioned upstream of a redd) is to swing a streamer or baitfish pattern across the redd in front of a targeted steelhead (literally just "nipping" but not touching the nose of the fish). This tantalizing presentation can surprisingly invoke some ferocious strikes. Sometimes just "hanging" the fly (not moving) just in front of a spawning steelhead can also trigger a strike.

The above techniques are obviously not intentional snagging methods but precise "fair hook" presentations especially when watching both your fly and the take of a targeted steelhead. Yes, unintentional snagging can occur on the redds but this usually occurs with "sloppy" presentations by inexperienced steelheader's. To decide whether you elect to fish the redds for steelhead at all (some steelheader's have understandably strong objections to this practice) please see ethics discussion below.

Fly rods in the 9 to 10 foot range with medium to medium-fast actions are ideal for fishing egg patterns, nymphs as well as wooly buggers and streamers. Longer 10 ½ foot fly rods (custom made from "noodle" spinning blanks) provide superior line and leader control when trying to achieve drag-free drifts. They also allow for big fish playing capabilities on light tippets due to their soft actions and shock absorbing abilities.

A floating fly line, like the Wulff Triangle Taper, works well on the spawning beds particularly when fly casting at a relatively short distance (30 ft. or less). They have the delicacy of a double taper at short distances, which makes line mending rather easy, and at the same time provide the power of a weight forward to turn over split shot and floating indicators. This is due to their unique triangle taper configuration, which concentrates the bulk of the heavy part of the taper (which can interfere with drag-free drifts) away from the butt of the leader.

Leaders should be kept relatively short (9-10 feet) when fishing the beds. This allows for close in casting in relatively shallow water. In adjacent runs and pools (which are deeper) longer leaders up to 12 to 14 feet work better especially when using a floating indicator. Adding a florescent red section of Sunset Amnesia monofilament to the butt section of the leader is a good way to build a strike indicator into your leader especially when you are not using a float.

Fly fishing steelhead spawning beds seems to have its proponents and detractors. In the Pacific Northwest this practice is strongly discouraged on rivers with wild steelhead feeling it is very detrimental to successful spawning. On the other hand Michigan steelheaders seem to have no problem with fishing on the beds even though 50 % of their fish are known to be naturally reproduced.

The American tributaries of Lake Erie produce a small number of naturally reproduced steelhead (the runs are primarily based on hatchery raised steelhead smolts and fingerlings) so fishing the beds does not have much of an impact on future steelhead runs. An exception are some Western NY Lake Erie tributaries (including Chautauqua and Cattaraugus Creeks which have been documented to have as much as 25% naturally reproduced steelhead). On these tributaries it is not recommended to fish the beds in the spring to protect a developing wild steelhead fishery (several feeders to Cattaraugus Creek are actually closed to fishing in the spring in order protect wild steelhead natural reproduction).

The Canadian tributaries of Lake Erie (Ontario Province) are almost entirely based on naturally reproduced steelhead runs with most tributaries closed in the winter and early spring to fishing.

If you do choose to fish spawning beds in the spring (where legal), land and release steelhead quickly, keep fish in water at all times, keep handling to a minimum and be sure not to wade on known spawning gravel.

Many steelheader's who frown on fishing steelhead spawning beds (including rookie steelheader's who lack presentation skill), prefer to target only pre-spawn, post-spawn and drop-back steelhead in order to protect both established and developing wild steelhead fisheries.